WELCOME TO THE TRACK & FIELD PAGE!

Welcome to Bishop Ward's Track and Field page! Throughout Ward's vibrant history over the past 110+ years, students who wore the Cyclone on their jersey have seen fantastic successes in Track. With hard work and determination from current athletes with the support of the strong coaching staff, we are building upon the historic achievements as displayed on the trophies inside the halls of Bishop Ward High School and we are now seeing what we have called "The Return to Greatness".

Coach Subasic first started Track and Field in high school as a freshman at Bishop Ward High School. He was a member of Ward's track team for all four years of high school with his main event being the javelin throw, while occasionally competing in the 4x100m, 200m, and Long Lump events. Coach Subasic began coaching the Bishop Ward Track and Field team during the 2019-2020 season and coaches the Javelin, Discus, and Shot Put events.

Coach Lavery started Track and Field in Jr. High at a small school in Southwest Kansas.  In high school, she competed in the 400m, 200m, 4x100m, 4x200m, 4x400m, and Long Jump.  She was successful and participated in the KSHSAA State Track Meet three out of four years in high school.  She also holds the 400m record at her high school as well as being a member of her high school's record holding 4x400m relay team. She has been coaching Boy's and Girl's Track and Field since 2008 for the CYO team of St. Joseph Parish in Shawnee, KS and has had several past CYO jumpers compete at the high school level with success. Coach Lavery began coaching the Bishop Ward Track and Field team during the 2019-2020 season.

Coach Wiley started Track and Field after the 5th grade and has been heavily involved in the track scene in the United States and around the world since then. Coach Wiley ran track at Kansas University and represented the United States National team. He was a member of the World Record achieving USA team in the 4x100m relay in the 1977 Athletics World Cup (time 38.03 s). In 1979 Coach Wiley was also a member of the winning 4x100m United States relay team at the 1979 Pan American Games. In 1983 Coach Wiley became the United States champion indoors at 440 yd. Coach Wiley's accomplishments in the sport are too numerous to list here, as is his esteemed coaching career with his most recent title being the Head Coach of the Girl's Track and Field team at Washington High School for 7 years. Coach Wiley began coaching the Bishop Ward Track and Field team during the 2019-2020 season and coaches the Sprints and Relays. Included below is an image of his Personal bests in the 100m, 200m, 400m, 4x100m, and 4x400m and a link to his Wikipedia page where you can find more information about him. 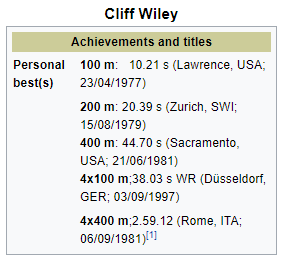 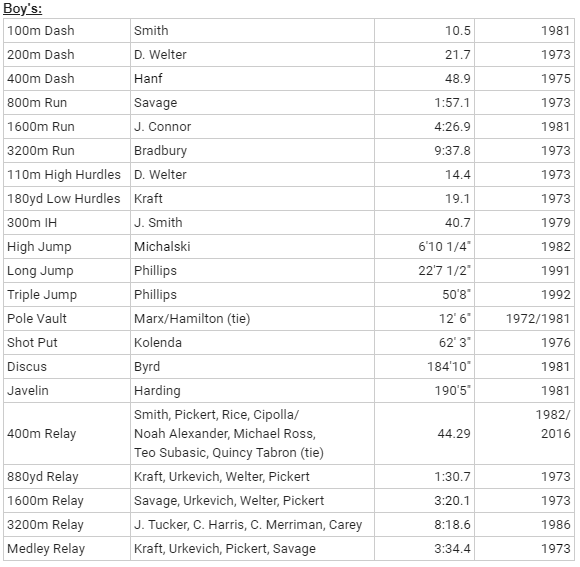 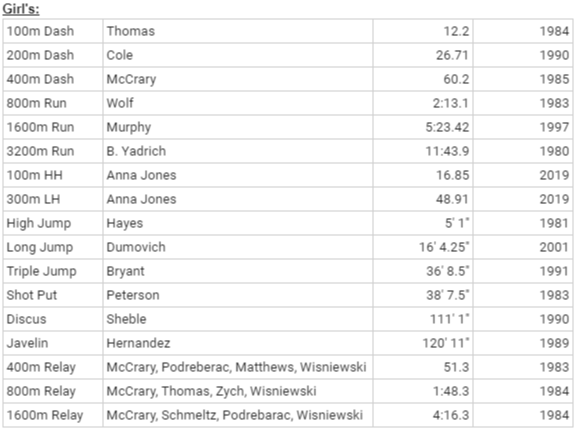